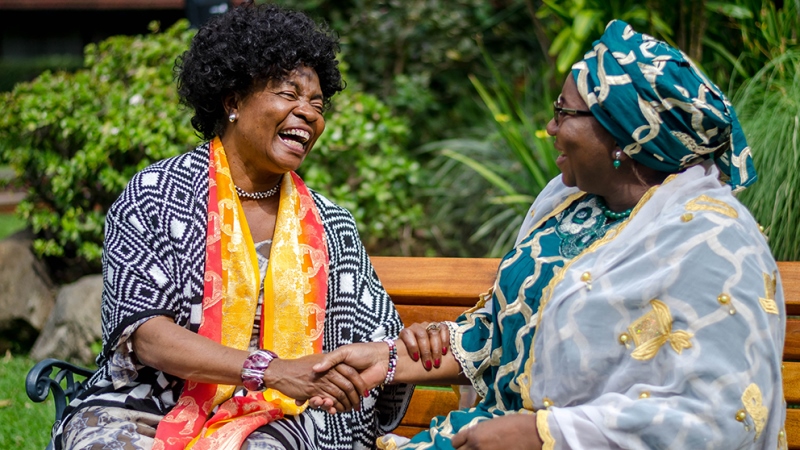 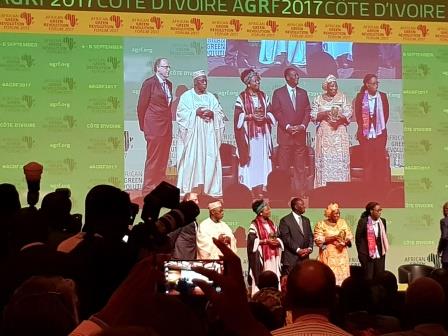 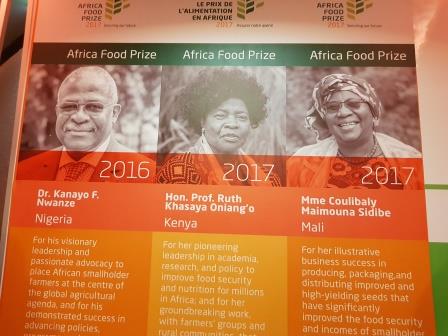 Last week the African Green Revolution Forum (AGRF) was held in Abidjan, hosted by H.E. Alassane Ouattara, President of Côte d’Ivoire. The Forum was attended by more than 1300 delegates and many high level dignitaries. On the agenda were the announcement of concrete investments in agricultural businesses and the establishment of new and innovative approaches and partnerships to deliver programmes for greater results.

The Forum saw the signing of numerous agreements and business deals that will be key in bringing to life major agricultural transformation commitments including the US$ 30 billion committed at the AGRF in 2016. This charge was led by the African Heads of State present at the forum who were unanimous in their call for urgent action and committed to lead by example.

As part of the week-long Forum, a ceremony was held to award the two winners of the 2017 Africa Food Prize (AFP), selected from among more than 600 other nominees, a prize of $100,000. Kenya’s Professor Ruth Oniang’o, an advocate of nutrition, and Ms Maïmouna Sidibe Coulibaly, an entrepreneur and agro industrialist from Mali, were awarded for their contribution in opening access to affordable quality seed to farmers and improving the nutrition of the food on people’s plates.

Former Nigerian President Olesegun Obasanjo, who chairs the Africa Food Prize Committee, said the duo had played a key role in the development of the African food and nutrition environment.

“It is not by coincidence that Africa food situation has improved year after year. These two winners have greatly contributed to the transformation of the lives of small farmers and pushing for change that has led to great progress in continentwide nutrition levels,” said Obasanjo.

She also served as a member of Kenya’s ninth parliament from January 2003 to December 2007.

Prior to that, she had served as Professor of Food Science and Nutrition and founder Director of Graduate Studies at the Jomo Kenyatta University of Agriculture and Technology.

In 2001, she founded the African Journal of Food, Agriculture, Nutrition and Development (AJFAND) as a platform for publishing scholarly works by African scholars and others with an interest in issues related to food, agriculture, nutrition and development.

She continues to edit the journal, in addition to her role as the first Executive Director of Rural Outreach Africa (ROA), a non-profit community development organization that she established in 1993 to improve the livelihoods of rural people.

In her recent role as Vice-Chair of the Global Forum on Agricultural Research (GFAR), Prof. Oniang'o worked to “bring a voice to the voiceless”, using GFAR’s multistakeholder platform to advocate for smallholder farmers, especially youth. She sought to bring her expertise and influence to capture the attention of policymakers and donors who make the decisions that determine the course of agricultural research and development at the global level.

Her commitment to the community has seen Prof. Oniang’o receive two national medals: the Silver Star (SS) medal in 1995 and the Distinguished Service Medal (DSM) in 1998.

“I feel honored to have the work we have done over so many years recognized and I hope that more people shall join us in the quest to have a food-secure continent,” said Oniang’o. 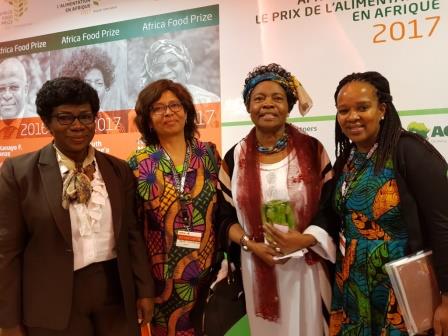 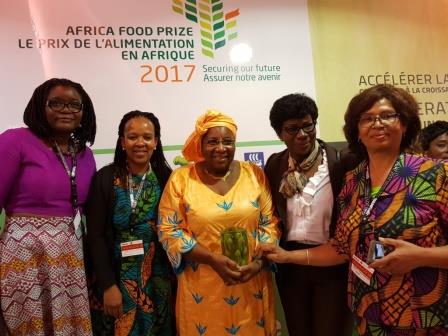 Coulibaly, the other Laureate, is a renowned agripreneur in West Africa, where she has invested heavily in seed production and distribution. Her company Faso Kaba produces and supplies improved and high-yielding seed, some of which have been confirmed to increase yields by up to 40 per cent.

Coulibaly thanked the awards board for recognizing her work, and urged more women to invest in agriculture.

“Agriculture is the main hope for Africa’s success and I would like to encourage everyone, and especially African women, not to shy off from investing in the sector. I must say that it is not an easy path, but its rewards are tremendous,” said Coulibaly.

AFP is the most prestigious prize in African agricultural development in terms of numbers and scope, honouring outstanding contributions across every aspect of agriculture and food production. The aim of the prize is to assist in combating hunger and reducing poverty in Africa.

The AFP began as the Yara Prize, established in 2005 by Yara International ASA in Norway to honour achievements in African agriculture. It was expanded and renamed as the Africa Food Prize in 2016.

This news is adapted from a news item published by the AGRF Secretariat. For more on the proceedings and outcomes of the Africa Green Revolution Forum, visit the AGRF website here. 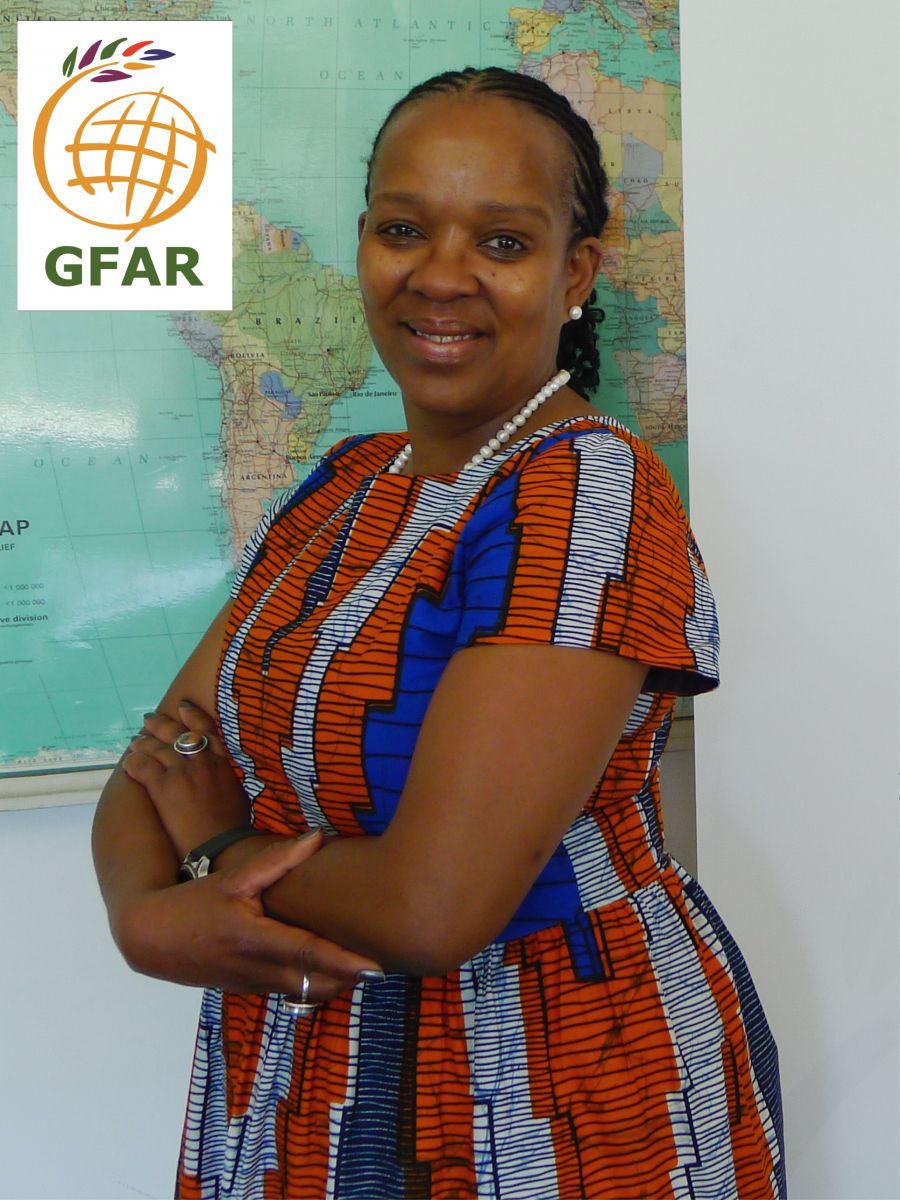 The AGRF was also attended by GFAR's current Chair, Ms Bongiwe N. Njobe, who plans to bring an action-oriented approach to GFAR, leveraging its unique position in the agricultural space to advocate for collective action across sectors. Read more here. 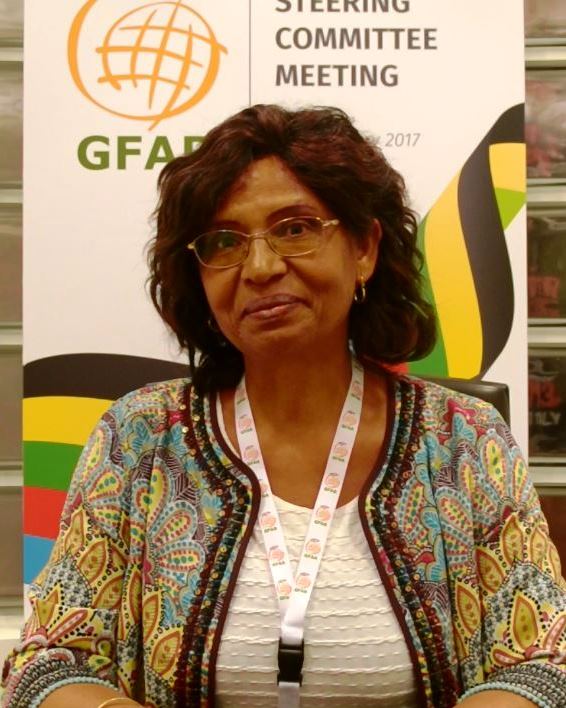 Prof. Agnes Mwang'ombe represents Higher Education at the local level on the GFAR Steering Committee. She is now co-leading the launch later this month at the University of Nairobi of GFAR's Collective Action on Transformational Learning and Student Leadership. Learn more here.